The Canada Pension Plan (CPP) was created in 1965 federally. With federal-provincial negotiations, CPP legislation allowed provinces to withdraw from the plan if they established a comparable contributory retirement pension plan, including disability benefits and survivors’ benefits. Québec thus established the Québec Pension Plan (QPP), which came into effect in 1966. Although the two plans are very similar, changes over the years have caused them to diverge slightly as both plans adjust to an aging population with longer longevity in different ways. For example, QPP contribution rates have been set slightly higher than CPP contribution rates since 2012.

Some differences between the two pension plans can affect your decision for taking your pension earlier or later. These differences come from the calculation of dropouts from your contributory period. Both plans define your contributory period as the total months starting at 18 years old, to the month before you start your pension; as early as 60 or as late as 70. The contribution period can be modified to drop a number of months of low earnings.

As shown in the table above, both plans have a child-rearing provision to allow dropping months from years where earnings were lower than average due to raising a child under 7 years old. Both plans also allow dropouts for when a person was collecting CPP or QPP disability payments. Because no contributions to QPP are made for worker's compensation payments from Québec, those months can also be dropped for QPP. Outside of Québec, worker's compensation payments do require CPP contributions, and thus are not dropped.

The differences we are going to consider here are the last 2 shown in the table. First, CPP has an additional after-65 dropout provision that QPP does not. This provision allows for months after age 65 to substitute lower earning months pre-65 or to be dropped themselves if they are low earning. Second, although everyone gets a general dropout provision if the remaining contributory period is greater than 120 months, QPP drops 15% of the remaining contributory period while CPP increased that rate to 16% in 2012 and then 17% since 2014. Both round up any partial month.

A couple from Québec pointed out to me how these difference between the two pension plans was affecting their decision on when to start their pensions. I had not considered those differences in my previous blog post on CPP/QPP optimization. This is an important consideration that has not been made widely known to QPP contributors. In fact, you can find many examples of incorrect information for QPP in the popular press. This has been pointed out recently in this article by Marie-Eve Fournier in La Presse.

When you apply for the pension, both plans calculate a base amount, which sums all your earnings indexed with the Yearly Maximum Pensionable Earnings (YMPE) in the contribution period. It then divides by the number of months in the contribution period to get your average earnings. For the regular CPP/QPP that base amount is multiplied by 25% to get your monthly pension amount. Additional amounts are then also added for the Enhanced CPP and QPP that started in 2019. This amount is what you would receive if you started the pension at 65. There is a pension reduction of 0.6% (for QPP it's 0.5% to 0.6% depending on your earnings) for each month you start it earlier than 65 (up to 36%), and a 0.7% pension increase per month the pension is started after 65 (up to 42%). Since these calculations are similar for CPP and QPP, we will only consider the non-enhanced base amount with some simple examples to study the effect of the differences in the plan's dropout provisions.

First consider Connie. She started CPP earnings at age 24 at $50,000.00/year in today’s dollars, that have been and will be increased according to increases in the YMPE from then until she retires. Quentin has the exact same scenario but contributed to QPP. Both are turning 60 and are considering what difference it will make on their pension if they retire now or later. The following two tables show the amount of their pension if they stop working and start CPP (Table 2) or QPP (Table 3) at all ages from 60 to 70.

Both can drop the 6 years (72 months) of no earnings from age 18-23 and since they will work to retirement, they do not need additional dropouts to receive the base CPP or QPP, which will be reduced if they retire before 65 and augmented if they retire after 65. There is no difference between the base amount ($1041.67) for QPP and CPP in this case. The actual months contributed is always more than the contributory period in both cases. There is a small difference between the actual amounts if the pension is taken before 65 due to the QPP penalizing slightly less than CPP when the average earnings are less than maximum (which would be $1243.75 in 2022). While Connie gets penalized by 0.6% per month before age 65, at their average earnings, Quentin is only penalized by 0.582% per month before age 65 in this case.

If Connie had started work a year later, the final CPP would not change at whatever age she takes it because she can drop that year without penalty. However, for Quentin the 15% dropout instead of 17% will result in up to 8 months of no earnings to be included (depending on when he retires), reducing the average earnings and the base pension slightly compared with CPP. This creates a higher penalty for taking the QPP early. In this case, the effect of the final amount received it is somewhat mitigated by the lower than 0.6% per month pension reduction formula imposed by QPP so that the difference in the final amount received if Quentin had received CPP instead is very small, as shown in Table 4.

If Connie had started 2 years earlier, she would not be able to drop all the months with no earnings (not shown). In these cases, working past 60 is necessary to make up contributions that cannot be dropped and the base amount not reduced.

If instead of working until retirement, they stop working at 60, so that they have worked from ages 24-60. With having no earnings past 60, then these years will reduce the average earnings if they delay taking the CPP (Table 5) or QPP (Table 6).

Delaying past 65 shows the effect of the CPP after-65 provision, as those years do not add to the contributory period and do not reduce the base CPP. Connie can take advantage of the full benefit of getting an extra 0.7% per month she delays taking the pension past 65, up to 42% more if she waits to 70 rather 65, or 105% more compared to taking it right away at 60.

For Quentin, those post-65 years are not dropped and keep lowering the base QPP further, so the benefit of delaying past 65 is reduced to a maximum of 28% more, or 78% more if compared to taking it right away at 60.

However, you see an example of QPP being more advantageous than CPP in table 6. It occurs at age 60, where Quentin gets $10/month (1.5%) more final pension than Connie. This happens due to the lesser penalty applied for taking QPP pension early compared to taking CPP pension early. The difference is very small here, but it gets larger with lower earnings. Consider Table 7, where we show Quentin's calculation and compare the final values for the pensions obtained if they had made $30,000/year from ages 24 to 60 instead of $50,000. The difference at age 60 is now 4.7% more for QPP ($419/month) than for CPP ($400/month). 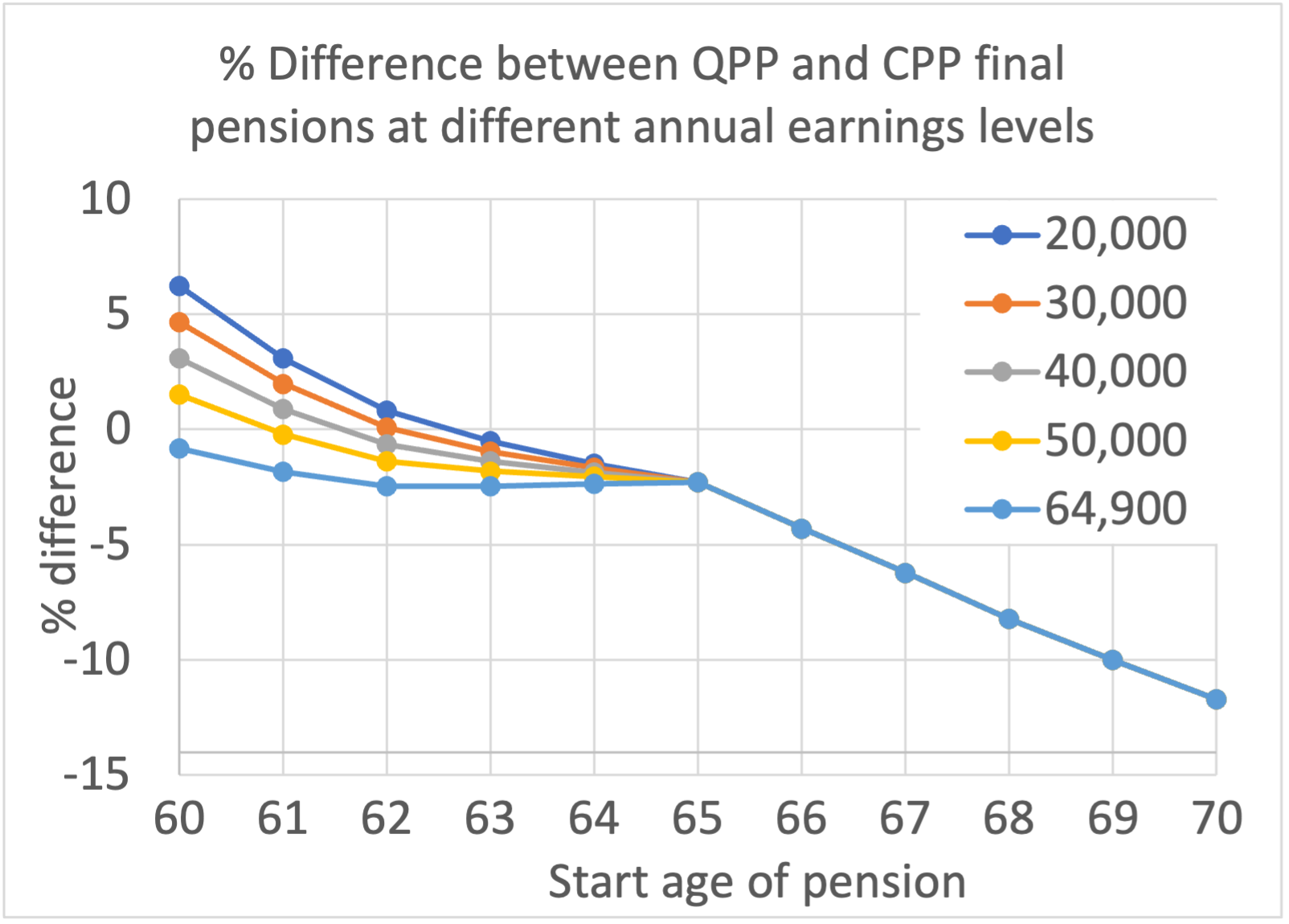 So, the lesson from these simple examples is that even though the general dropout provision for QPP is lower than for CPP, you will not necessarily be penalized more by QPP than by CPP for a short career, as the difference in the reduction formula for taking the pension before 65 is more generous for QPP and can more than make up for the extra months of contributory period, depending on your level of earnings. This is shown in Figure 1 for a carreer spanning ages 24 to 60.

However, although by delaying the pension you will receive a greater amount in any case, the benefit of delaying is higher for CPP than for QPP due to the after-65 provision of CPP. This difference will only be enhanced with the enhanced CPP and QPP, and with increases in the YMPE that are often greater than inflation, which we have not considered here.

I wanted to study how this would impact real people, not just made-up examples. The MoneyReady App has a tool, the (CPP or QPP Optimizer), to determine the best age to start your pension, in combination with a spouse if there is one, and in combination with finding an optimum withdrawal strategy in retirement. To investigate the differences between CPP and QPP on actual life scenarios, I ran the Optimizer on an anonymised database of all MoneyReady App users that were not already taking CPP or QPP. The first run was done as if all were CPP contributors and the second as if all were QPP contributors instead. So the only difference comes from the pension calculation, their province for calculating taxes remained their own, as everything else.

We then analysed difference in the frequency of users optimally starting the pension from 60 to 70 under the two scenarios (Figure 2). Waiting to at least 65 was beneficial for 74% of users under CPP, but only for 63% of users under QPP. 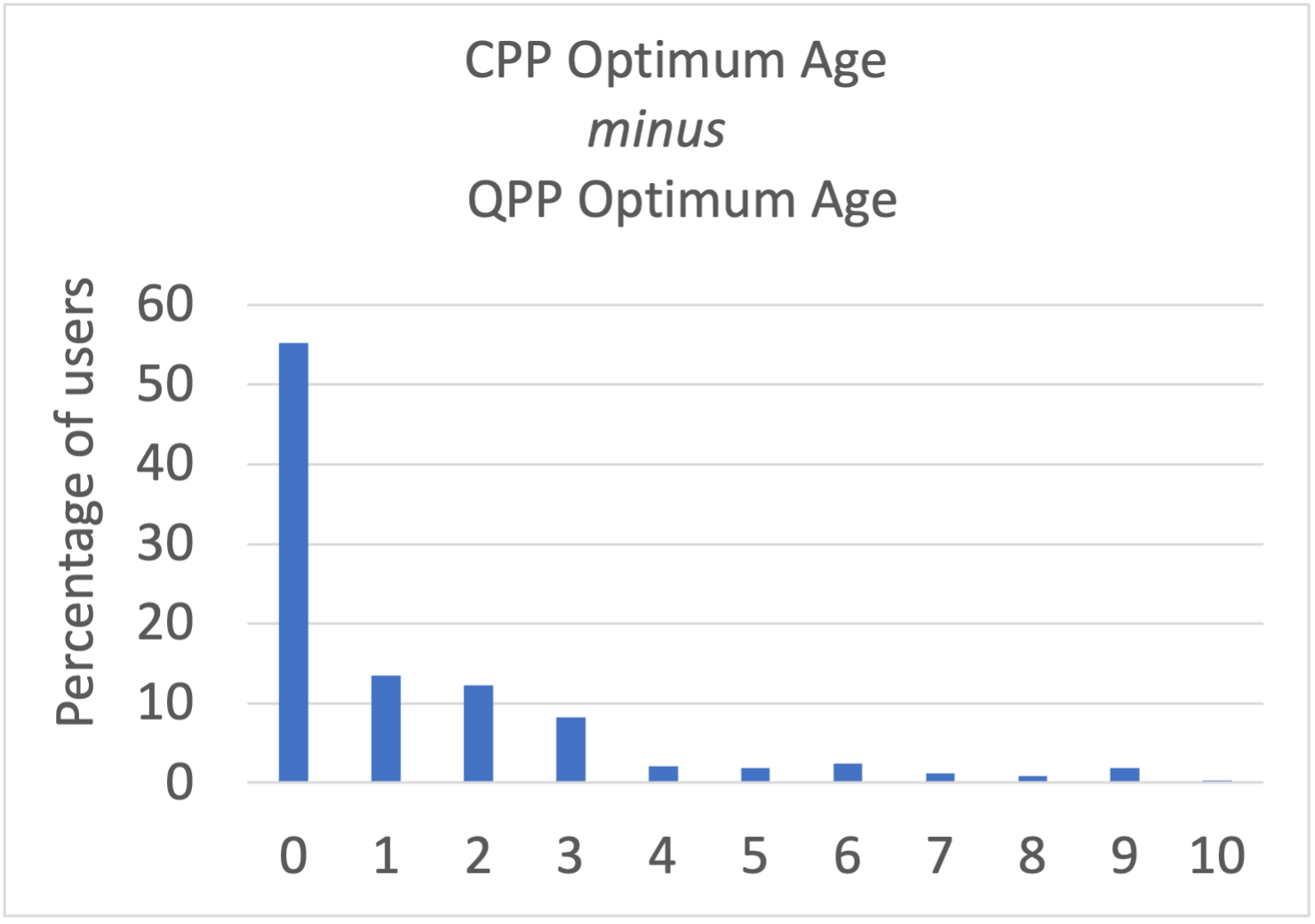 However, for most users (55%), their optimum age to start the pension was the same with the CPP or the QPP calculations. The rest benefited from taking the QPP pension a few years earlier than if they had been taking a CPP pension (Figure 3)

Connie, Quentin, and the MoneyReady App user results are consistent. The differences between the two pension plans are not very large and only apply when you have had a short career. If you are considering early retirement, you need to consider your circumstance and pension estimates carefully. If from Québec, the decision to take the QPP earlier rather than later is easier for you as you won't lose as much benefit as if opting to not delay taking a CPP pension.